We continue to follow guidance from the local authorities as to whether Lymington Seafood Festival can go ahead safely in August.

If we can it will be with additional distancing measures in place or potentially a slightly later date.

Two days of fishy fun, delicious food and drink stalls from local artisan producers. With demonstration kitchens to feed your culinary curiosity, plus our live music stage to keep the party going, we’ve some great bands bringing you soul, jazz, blues, ska and a load of classic sunshine tracks.

The New Forest is blessed with some of finest artisan producers and eateries in the country and the Lymington Seafood Festival is excited to be bringing you some of the best. With around 90 food and drink stalls, all offering something a little different you can ‘graze’ your way around, sampling lots of little fishy delights.

Meat eaters, vegetarians and those with a sweet tooth need not panic either as we’ll be making sure everyone is catered for!

The region’s leading chefs will be showing their skills in our demo kitchen led by Chewton Glen’s Luke Matthews. OR why not enter our Oyster eating competition!! The challenge is simple – eat half a dozen oysters and half a pint beer down in the fastest time to win!

All set with stunning view across the Solent. What better way to spend the weekend?

If you’re looking for somewhere to stay, things to do, looking to make a weekend of it, or want to come back and visit the New Forest or Lymington again, then visit https://gonewforest.com/ 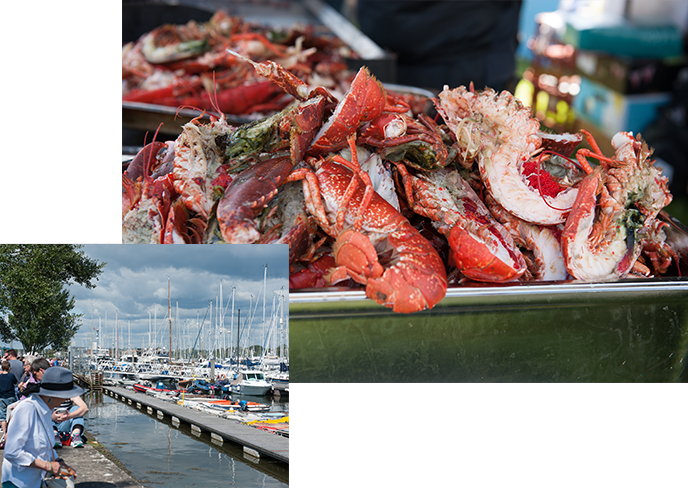 Keeping you entertained throughout the festival are a host of great bands and artists, playing music across a range of genres. Check out who’ll be on the stage!

The Pocket Orchestra performs contemporary slant on popular acoustic music from the late 19th and early 20th Centuries. This trio has a style all of their own, performing in some of the coolest venues across the UK with a mix of blues, ‘rag time’ tunes that’s just perfect to enjoy in the August sunshine.

Carley began by busking on the streets of Lymington until she was asked to perform inside venues. She is becoming a household name in the South of England and releasing her own music with her debut single ‘Won’t Say Sorry’ and her other two tracks ‘Honest Conflict’ and ‘Found’ will be released later this summer.

In 2018 Carley won The Dorset Venus Award for Musical Talent and has since gone on to perform in famous venues such as The Waldorf and The Ritz in London.

Time to get down and groove! Dorsal Fin are the ultimate party band-  a highly talented group of musicians playing an irresistible fusion of funk, rock, reggae and disco from the late 70s to now! Drawing from artists such as Chic, Stevie Wonder, Santana and Bruno Mars, their energy and enthusiasm will have you moved by the groove to get down and dance dance dance!

Emma is a 17 year old singer songwriter equally at home playing guitar and singing her own songs and covers. Talented beyond her years, Emma delivers upbeat acoustic covers performed either solo or as a member of a duo/trio with either Paul Denson on bass or Sean Samber on lead guitar.

Featured on BBC has played live on BBC Radio Solent and can be seen at numerous shows and festivals this summer across the south coast.

New for 2020 Yacht Club play smooth “Yacht Rock” covering classic artists from the 70’s and 80’s such as Toto, Hall and Oates and Fleetwood Mac. All delivered in a fun, nautical, tongue in cheek style.  It’s the perfect band for a summer festival and are sure to get you up dancing!

We’re delighted to have this super-talented solo-artist joining us for the Festival weekend. With a perfect blend of covers, old and new, and across a wide range of genres, it’s no wonder he’s in demand at leading venues across the south coast. Sit back, fill your glass and enjoy! Find him on Instagram below:

Music that transports you from Paris to the Mississippi Delta, and from Bolivia back to Scotland this 3 piece will keep your toes tapping!

An energetic 3 piece rock and pop band! The band play a wide range of rock and pop classics with modern anthems thrown in to entertain all generations.

Cooking Up a Storm….

“We’re delighted to welcome 2016 Masterchef winner to this year’s Festival. Food has always been a part of Jane’s life, millions followed her Masterchef journey and were touched to learn of her battle with cancer.

There’s no dish, ingredient or technique Jane is afraid but perhaps the highest accolade was by judge John Torode who said: “Jane has more determination, more drive, more heart than I’ve ever seen in a MasterChef contestant in my whole career.” In September her first book will hit the shelves ‘Hassle Free, Gluten Free’.

Delighted to have Shelina Permalloo join us at the seafood festival demo kitchen. Born in Southampton Shelina was crowned winner of the MasterChef 2012. Since Masterchef Shelina has published books and launched her own Mauritian street food restaurant in Southampton called Lakaz Maman. A Mauritian Creole word for “Mum’s House” she cooks relaxed informal food from the heart, we can’t wait to try her signature Octopus dish!

Davina is multi disciplined freelance home economist with an insatiable curiosity about food, and a passion for local and seasonal ingredients.  She has had a varied career in the food industry, education, communication and marketing.
She works with a multitude of chefs, producers and food writers as well as with global cookware giant Le Creuset UK.

At the heart of one of the New Forest’s most beautiful and historic villages lies the multi award-winning Terrace Restaurant at The Montagu Arms Hotel – it has three AA Rosettes and is run by new Head Chef Matthew Whitfield who recently returned to the UK from one of the world’s top restaurants.

Working under renowned chef Daniel Humm at Eleven Madison Park, Matthew has extensive experience at a succession of Michelin-starred restaurants. His style of cooking is modern and refined using the best of the New Forest and the hotel’s home-grown produce to create dishes that take local provenance really seriously. Matthew’s food engages all the senses, bringing a sense of theatre to the table.

Steve has over 20 years’ experience at Michelin level restaurants and is widely acknowledged to be one of the leading cookery school’s tutors in the UK, having been Chef Director at Raymond Blanc Cookery School he joined the team at Chewton Glen earlier this year to head up The Kitchen. An infectious personality and brilliant chef. We can’t wait to see what foraged delights he brings along!

A trawler man turned award-winning chef, Harbour Hotels’ Chef Patron Alex Aitken has an incomparable passion and respect for seafood; keeping things simple, with dishes that allow the flavour to shine through. Following 25 yrs cooking within the New Forest, including running his own Michelin-starred restaurant, Le Poussin in Brockenhurst, Alex joined the Harbour Hotels Group in 2010 to head up its Jetty restaurant concept. With the flagship Jetty restaurant in Mudeford, Dorset, having established itself as the country’s number one seafood restaurant (recently awarded the coveted title of the ‘UK’s best seafood restaurant’) The Jetty concept now stretches from Devon to Sussex, landing in Southampton this year.

As well as being a producer Jennifer is a renound course tutor sharing her knowledge and expertise delivering cookery courses at the above establishments and throughout the UK and abroad. Be it indoors or out on wild food foraging tours in and around the UK 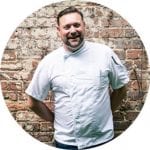 Ian, originally from the Midlands via the Cotswolds, settled in Dorset 14 years ago. With a passion for reducing food miles using the fantastic produce from around the local area, Ian has achieved awards such as The Dorset and Hampshire Chef of the Year, Rioja Chef of the Year and the 2015 contribution to industry award presented by the Christchurch Food Festival.

Ian uses food festival demonstrations to showcase our amazing foodstuffs with his own style, developed over many years and experiences throughout his career, a highlight being selected to cook for HRH the Queen and the Duke of Edinburgh at Gloucester Cathedral for the Maundy Thursday service.
Within his South West cooking adventure, Ian achieved many AA Rosettes and held the only Michelin Bib Gourmand award In Dorset between 2013/14

After recovering from life-threatening illness Ian has enjoyed consulting throughout Bournemouth and the New Forest he is now Head Chef at the stunning Mill at Gordleton. A new long term project with an awesome future. Ian and his team will utilise produce from the Forest and surrounding area defining the Hotel’s food menus, developing and training the team to build its reputation with an ever-evolving Restaurant. As seasons and produce change (sometimes very quickly) so will our food offerings. Expect Fish from Lymington and Christchurch and the South West as well as Meat from the Forest and produce from the Isle of White. So come and say Hi and chat all things food!

Luke Matthews has been Executive Head Chef since 2003. Regional ingredients, inspiring new flavours, and a focus on sublime, contemporary cuisine is the order of the day at Chewton Glen. Luke makes regular appearances at cookery demonstrations and exhibitions and has also appeared on the BBC’s popular ‘Saturday Kitchen” with his good friend and former Chewton Glen colleague, James Martin.

Matt started his career training in several Michelin starred country house hotels and used this experience to further his culinary knowledge whilst he travelled around the globe. He has headed up many prestigious kitchen brigades achieving 2AA rosettes and being Michelin recommended for the last 10 years. In 2015, Matt took over the kitchen at Schpoon & Forx set within the Hilton Bournemouth. Matt specialises in serving modern British cuisine with an emphasis on local seafood, serving the best of British produce in a relaxed stunning location. Matt’s food philosophy is grounded in adhering to the classics but adapting them to the modern palate, using local Dorset and Hampshire produce sourced from local farmers and fishermen to produce dishes that are simple but elegant.

He has headed up many prestigious kitchen brigades achieving 2AA rosettes and being Michelin recommended for the last 10 years most recently at the time Rhinefield House Hotel, Lord March on the Goodwood Estate, Bournemouth Highcliff Marriott Hotel, Highcliff Grill, Executive Chef at the Hilton Bournemouth and the Schpoons & Forx and currently heading up the team at Stanwell House.

Matt’s passion is for simple, modern British cuisine using the best produce sourced from produce from local farmers and fishermen. He can be seen demonstrating at local food festivals all over the south coast showcasing the amazing products that our county has to offer.

One of the most exciting pastry chefs in the south, Chocolate by Miss Witt continues to scoop awards for her innovative and daring creations. Having worked with Alex Aitken at his Michelin star restaurant ‘Le Poussin’ and at the Bluebird, Chelsea, she started out on her own in 2012. Creating award winning delights such as blackcurrant & star anise or orange marmalade & Glenfiddich Whisky with chocolate. Can seafood and chocolate really work together? Miss Witt may have the answer!

Steve, originates from Cumbria and was trained under Executive Chef Justin Woods (originally Head Chef at The Lanesborough).  As Head Chef, he now leads a large brigade at The Noisy Lobster located on the idyllic Avon Beach in Mudeford, Dorset. Steve’s passion is to showcase locally sourced fresh fish and seafood from our fisherman’s catch, which includes our speciality Mudeford Bay Lobsters. Steve has excellent artistic flair with creative dishes and constantly strives to deliver something different with daily fish specials and seasonal menus. He is passionate about sustainability and we donate to the National Lobster Hatchery to help with sustainability within local waters.